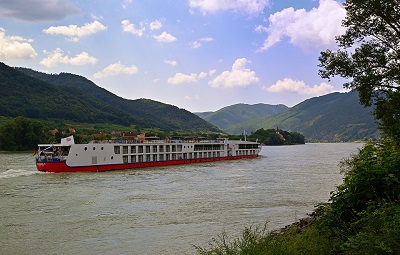 The mighty Danube River, named by the Greek historian Herodotus “The King of the European Rivers,” forms much of Romania’s southern border, with Bulgaria. The Danube enters the territory of Romania at the famous Iron Gates (Portile de Fier) and it ends its 670 mile journey through the country in the Black Sea.

Before meeting the Black Sea, the Danube forms one of the most spectacular wetlands in the world, the Danube Delta – a unique 2,100-square-mile wildlife reserve – home to more than 300 species of birds and about 160 kinds of fish, both fresh and salt-water species.

Sights along the Danube

Among the many sights near or along the Romanian section of the Danube River, worth visiting are: the ruins of the Roman bridge at Drobeta, Topolnita Cave, The Iron Gates Dam, the cities of Drobeta Turnu Severin, Orsova, Giurgiu, Oltenita, Braila, Galati and Tulcea. Bucharest, Romania’s capital city, is only 40 miles north of the cities of Giurgiu (Romania) and Ruse (Bulgaria), both situated on the banks of the Danube.

Galapagos Islands Travel 2022
The Inca claimed to have discovered some islands in the Pacific, but it is not known for s ...
Iceland Vacation Packages
Iceland is known for its contrasting landscapes that literally cause the earth here to smo ...
Key West Vacation Packages
Key West is not just some Florida beach town. It is absolutely packed with history: Presid ...
Private Jets
The travel time to the airport and the security check-ins are very hectic. They take up a ...